I mark my life with books. My first audio book was my mother’s voice reading Huckleberry Finn to her only child during the dark days of World War II. When mother read, I no longer felt alone as the New Mexico sandstorms wailed through the loose windows of our gray stucco house in Gallup, New Mexico. I wasn’t there. I was inside my mother’s voice, and we were both rushing down the fast-running Mississippi River on a raft, and America was opening up on the way.

And so it would go, book after book, until I took my first solo journey into Robert Louis Stevenson’s Kidnapped, and realized there was a voice beyond my mother’s. It was inside the words themselves and I could find that voice all by myself. From then on I have always had a book nearby (from Mystics, Ten Who Show Us the Ways of God.)

And somehow, from my earliest years, I have had the priesthood. I have a photo of me on Good Friday, 1948. I am standing on the front step. The muslin chasuble blows in the New Mexico wind. In front of me kneel seven children, boys and girls, Anglos and Mexican-Americans. I am inviting them to rise and come forward for the adoration of the cross. I am eleven years old (from Landscape of Prayer.)

Those are the two magnetic poles of my life: books and the Franciscan Priesthood. The glue that holds them together is Saint Francis of Assisi himself. From the time I was thirteen years old and read Sophie Jewett’s God’s Troubadour, The Story of St. Francis of Assisi, St. Francis has been a major inspiration of my life. I became a Franciscan in 1955; I’ve written about him, prayed for his intercession, studied him, taught his life and spirituality and for the last 34 years led pilgrimages to Assisi (www.FranciscanPilgrimages.com.) The way of St. Francis is for me the way to Jesus. He has been called the Mirror of Christ and so he is for me. Francis and Jesus, Jesus and Francis are at the heart of all my ministry and writing, whether or not they are mentioned specifically. They inform who I strive to be. Everything else is extraneous autobiography. 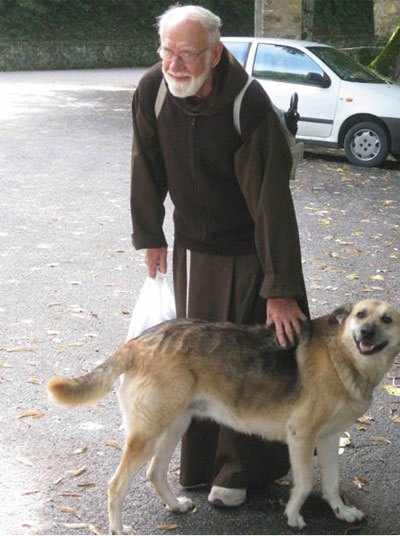 Fr. Murray and friend at the Hermitage of La Foresta in Rieti, Italy.