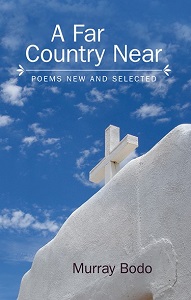 "In A Far Country Near, Father Murray Bodo reminds us that the poet’s true vocation is one of poring over the abundant phenomena before him–the landscape, its fauna, the lives of those who have walked this way before, the very textures of text–and pressing those images for revelation. Bringing together both new work and poems published since 1980, Father Murray makes manifest the profound nearness of all that reaches endlessly far, every discrete occasion partaking of “the beauty of life and death-and life."—Scott Cairns, author of Slow Pilgrim: The Collected Poems

"A Far Country Near is a rich poetry harvest prepared and worked at over many years. The poems have absorbed work of poets like George Herbert, Emily Dickinson, Gerard Manley Hopkins and Denise Levertov, and have their own voice, their own immediacy, their own impetus. That impetus is a dedication to faith and its corollaries, to figures like Saint Francis and Saint Clare, to places like Assisi and the American cities where he has served. The immediacy touches on a complex simplicity of love, for the things of God and the things of creation, from the bud of an orchid to the warm heart of love and friendship. The language is resonant, of a constancy to the rich barns of memory, of a clear-sighted view of what the poet has registered in a long and fruitful honouring of his vocation, both as priest and poet. And lines like these, covering such space and emotion, are so primarily telling: (part of a memory of Denise Levertov):

…the people-empty beach
when my cell phone rang and your
death dazzled away the gulls
nestled in the shifting sand where
wind began erasure and
you followed gulls to sea, your
words singing in my pocket

Read an essay I’ve written on why I write poetry and what it means to me.

The “far country” is the Kingdom of a loving God, and it is, in the poetry, proven beautifully to be near. This is a treasury of poetry that must be valued in our vacillating and darkening century."—John F. Deane, author of Give Dust a Tongue: A Faith and Poetry Memoir

“After pondering the poems of A Far County Near, I’ll never again hear silence as totally soundless."—Peggy Rosenthal in Image Journal. Read the article: “Singing Silence in A Far Country Near.”