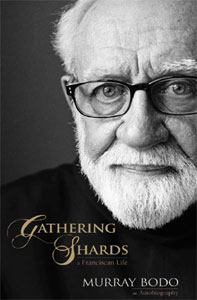 In Gathering Shards Murray Bodo celebrates 60 years as a Franciscan friar by telling the story of how God found him and called him to the Franciscan life when he was a young boy in Gallup, New Mexico, a life which has taken him far from his New Mexico roots, only to bring him home again to savor the desert and mountains that formed his early life.

The shards he gathers into this memoir are not the pottery shards he gathered as a boy, but the diverse shards that make up his life and that cohere because of the presence of God in all of them. The book celebrates his being a teacher and writer, a pilgrim and a pilgrim guide, a spiritual friend and companion, a poet and priest, and how all of these roles reveal the contours of his life, their unique shape and color adding to the forming bowl which defines his Franciscan life.

"The narrative is wonderful in itself…the artful inclusion of poems…are tools for discerning the inner and outer landscapes that are constantly invoked as formative elements that shape consciousness, fill memory, and invite increasingly profound introspection."—Sr. Margaret Carney, from the Foreword. Read the Foreword.

"…the book reveals a life that has contained much joy and satisfaction and whose difficult parts have been approached with a patience and confidence that never spills over into self-satisfaction or arrogance."—London Grip Read the London Grip review.