Visions and Revisions: Poems Celebrating 800 years of the Franciscan Way of Life 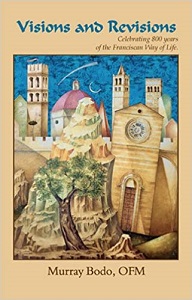 Taking his title from T.S. Eliot’s “Prufrock,” Murray Bodo constructs his “RSVP” to the invitation all Franciscans share this year to celebrate the eighth centenary of the Order’s origins. This poetic response begins in Part 1 with wonderful word-frescoes depicting scenes from the lives of Francis and Clare and evoking something of the mystical aura enshrined in legends and works of art. The following three sections of this work move us from medieval memorials to modern incarnations of this Franciscan life which is never removed from primordial human reality. At times poignant, at others probing, Bodo allows us an intimate glimpse into the world of a twenty-first century experience of the ways of Francis and Clare. Language that is stripped and utterly focused, like the lives of its subjects, dominates this work. We cannot forget, caught in his web of words, that the modifier “Franciscan” is best paired with the subject man/woman – at once at home in the world and on pilgrimage to its uttermost horizons.
— Margaret Carney, OSF, President, St. Bonaventure University