Francis: The Journey and the Dream 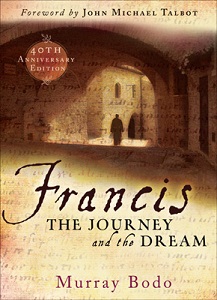 This is my first book, written in 1972. It has sold over 200,000 copies and to date has been translated into ten languages. The book is now available from St. Anthony Messenger Press in a handsome hardback 40th Anniversary Edition which includes a new Preface, a Foreword by John Michael Talbot, new material in the text, a bibliography, an author’s interview, and a reader’s guide.

Click here to read an interview in the Franciscan Newsletter about the 40th Anniversary of the book.

Click here to read about the 40th Anniversary Celebration of the book.